Cetus Scuba consists of a group of scuba divers (mainly NAUI) in Kempton Park. The level of our group range from Scuba Diver to Instructor. Our favourite diving sites include Sodwana Bay, Aliwal Shoal, Bass Lake and Miracle Waters.

In astronomy Cetus is the Constellation of the Whale.

The fantasy of the creators of pictorial constellation maps has left us pictures of sea monsters with fish tails - which do not at all resemble a whale. Cetus was the sea monster intended to devour Andromeda, and was killed by Perseus at the last moment. In Latin, however, Cetus means Whale.

The Myth - from The Hawaiian Astronomical Society

Cassiopeia, the mother of Andromeda and wife of King Cepheus of Ethiopia, thought she and her daughter were the two fairest that ever lived. In fact, she foolishly claimed that Andromeda was so beautiful that even the sea nymphs (Nereids) could not surpass her beauty. Hera, Zeus' jealous wife, and the Nereids themselves, overheard this. Furious at Cassiopeia's boasting, they visited Poseidon (the sea god) and demanded an immediate punishment. 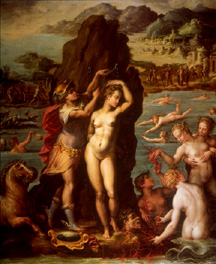 Poseidon sent the sea monster Tiamat (represented by Cetus) to attack King Cepheus' realm. With his kingdom in the gravest danger, Cepheus consulted an oracle for advice. He learned the only way to save Ethiopia involved the sacrifice of Andromeda to the raging sea monster. Heavy hearted and bitter over his wife's vanity, the king was forced by his people to comply. Poor Andromeda was dragged to a ragged part of the coast and was told of her fate.

She was stripped naked and chained to a large rock to await her grisly fate. The monster soon arrived. Tiamat was about to eat her, when the monster felt a sharp pain in his back. He turned and found Perseus flying with winged sandals and attacking him. The monster grew stronger as they fought. Then Perseus remembered that he was carrying Medusa's head. All who looked at it would turn to stone. He dropped his sword and took out the creepy object. The sea monster stared at it and turned immediately into stone. Andromeda watched the whole incident (except Medusa's head), and smiled with a sigh of relief.

Perseus fell in love with the beautiful Andromeda and carried her home to marry her. The gods made constellations for each of them, but felt Cassiopeia had gotten off too easy. They punished her by condemning her to circle Polaris forever in her throne.